Consider Elise Jeffries, One of My Original Characters

Who is Elise Jeffries?

She sprang, semi-formed, when I was first starting to put together Mettle. I needed for Noah to have a bounce-off person. I also needed to have at least one medical character.

Elise became a runner while I was writing Mettle. That was not my initial idea for her. And so, since I didn’t have a surname for her then, I gave her the last name of a friend who is a marathon runner.

Where Did Elise Jeffries Come From?

By the time I started to put together Mettle, I had already written snarky characters like Peri Martin, Greg Shapiro, and Trixie LaRue.

I had also written LGBTQ+ characters, most notably Ixalla and Tathrelle, in Untrustworthy. So, Elise wasn’t a wholly unfamiliar idea. But her execution was different. In particular, I saw her as being mixed-race but essentially identifying as Black.

The Past is Prologue — Backstory for Elise Jeffries

In Chapter 11 – Sb, Elise reveals that she and Noah have known each other for almost twenty years. That book was written before the pandemic, and originally took place in 2020. Hence they would have met in about 2000 or 2001.

Apart from her divorce from her wife, there’s virtually nothing on Elise’s history. Although I don’t see her as a native New Englander. So, she came from somewhere or other.

My first description of Elise is from Chapter 2 – Ti:

… a dark-skinned woman in her early fifties already seated at the table. Her curly hair sprang in all directions, barely contained by a red bandanna which accessorized a lab coat that had Suffolk County Morgue, E. Jeffries embroidered on the breast pocket.

So, she didn’t have a lot of description, and I don’t believe I ever really rectified that in the book.

For an actress who I would use as inspiration, I originally thought of Angela Bassett. But after seeing Star Trek: Picard, it was Michele Hurd all the way. 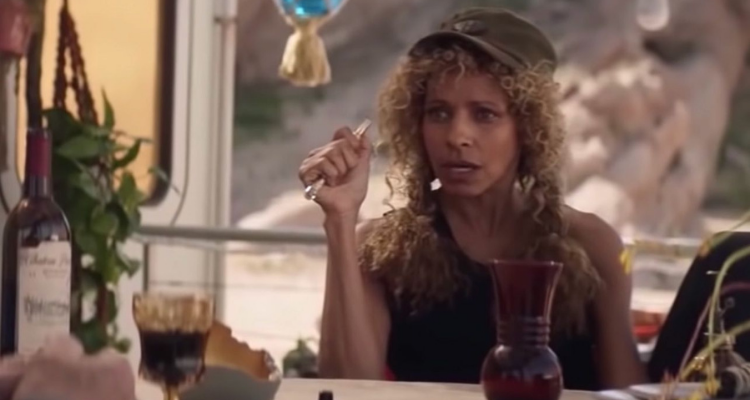 She has a good mix of snark and smarts, and feels like she could play a character who swears pretty much nonstop, but is also, most of the time, the smartest person in the room.

“But what? Craig, in case you hadn’t noticed, the world is ending or just about there and we are totally isolated and that’s about the best way to describe our situation. We don’t even know if there’s anyone else out there at all when you really think about it. We’ve seen no one else in months, and we sure as hell haven’t heard anyone. So maybe wrap your head around the concept that you should cut one of the last women on Earth a little slack, particularly seeing as you’re not Prince Charming yourself. Go and grab the little gusto you can because God only knows how long we’re gonna be able to sustain this.” (Mettle, Chapter 21 — Nb)

Offscreen, Elise is a divorcée, already estranged from her ex-wife, Tony, for a few years when Mettle starts. She and Noah Braverman are extremely good friends. Noah has an idea that he would like more. But Elise is unsure. She doesn’t want to mess up an excellent friendship.

By the time Mettle ends, she still isn’t in a romantic relationship.

Much like for the rest of the cast of Mettle, the conflict is a slow burn of how the world is ending as the metals of the period table start to disappear or undergo a transformation.

And, for the rest of the cast, the turning point is the same: the chapter where a vital metallic element starts to transform into … something.

Much of the book takes place on the real street I live on (the street names have been changed). Elise’s home is an illegal apartment inside an old Victorian which was probably a boarding house at one time. The exterior is a house around the corner which is up an enormous, steep hill.

And the interior ground floor matches the ground floor of a house my husband and I looked at before we bought our home. That building is around the other corner from our home. As for the inside of Elise’s apartment, it’s fairly generic.

Finally, because Elise is a snarky professional woman, I can trace some of her origins back to Marnie Shapiro and even Peri Martin. All three of them could easily spout sarcasm 24/7.

This smart, sarcastic character also loves fiercely. She was a lot of fun to bring to life.