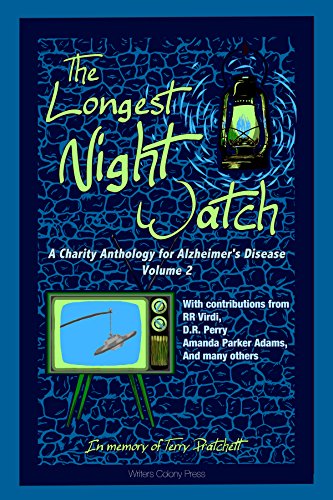 The Longest Night Watch 2 is the second indie author anthology dedicated to fighting Alzheimer’s. All of the writers are independent authors. And we all hate Alzheimer’s.

Thank you for checking out the Longest Night Watch 2!

In the United States, 5.4 million Americans have the disease. That number will rise in the next few decades as the population continues to age. We are not doctors. But we are writers. And so we are offering this work. All of the proceeds go to research. Because we don’t keep a dime of it.

So this is our second time doing this. Last year, we all came together because of Sir Terry Pratchett’s death. That book was a success. Therefore, now we are going to see if lightning will strike again.

Last year, it was Terry Pratchett. But this year it was Gene Wilder. And now we have also learned Terry Jones of Monty Python is afflicted. Because this disease shows no mercy. As much as we love these entertainers (and Jones is a medieval studies scholar), Alzheimer’s just plain does not care.

For this year, I added two stories. Cynthia is about the decline as witnessed by a rather unexpected narrator. Wilder Bloom was written rather quickly and was, of course, about Gene Wilder.

Where You Can Get The Book

Right now, the book is listed on Amazon (currently it’s Kindle only, but that will change) and on GoodReads.

How You Can Help

Please buy the book, and leave a review. Even bad reviews help, as they put our link in more places. So you don’t have to love the book. That’s okay.

And so we thank you.

Oh, and there’s a third…