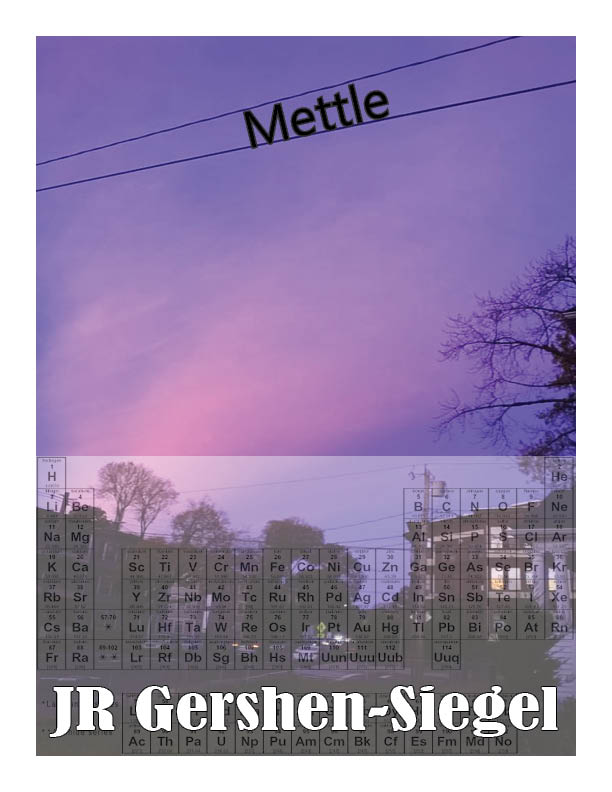 Mettle is a punny title. And it may be the best thing I have ever written.

The story sprung out of a dream I had where my wedding ring dissolved while still on my hand. Amateur psychologists, take note!.

I had the basic plot sketched out in an afternoon. I don’t believe I have ever gotten a book together that fast. And I probably won’t ever again. This was just an insane creativity timeline.

So the characters are a mix. Some of them came very quickly. Craig Firenze sprang, almost fully formed, and almost immediately. I heard his voice the loudest and the clearest. Then, as I recall, came Elise Jeffries, Nell Murphy, and Noah Braverman. Kitty Kowalski and Mink Lopez arrived together – Kitty and Mink. But the others took longer. However, I had Mei-Lin’s name pretty early. But I didn’t know too much about the character to start.

This story was exceptionally easy to outline. I changed nearly nothing. The storyline came to me, I wrote it down quickly, and then added a few little flourishes. And then it was ready. Which is amazing and kind of rare, seeing as I am struggling over the Time Addicts outline for Everything is Up For Grabs. So even Untrustworthy was harder to put together.

In early 2020, Mount Tambora erupts as an earthquake hits Southeast Asia. So which came first? That’s sort of irrelevant, as a huge pyroclastic cloud springs up. This cloud blocks out a lot of sunlight and starlight. It gets colder, and dimmer.

Yet at the same time, Chinese students claim their experiments on chromium changed when the chromium somehow converted to vanadium. But that story is buried; Tambora and the earthquake are front page news.

When more elements convert to vanadium, people experience the effects. This includes the loss of gold, which hits financial markets hard. And losses of plutonium and uranium, which put countries on high alert, afraid of a nuclear war.

The more things change, the harder it is to live the way we all used to. So the quoted scene, below, takes place after the power goes out.

Mettle is an odd story for me because there almost isn’t a main character. Instead, the point of view shifts from chapter to chapter. The character with the most ‘screen time’ is probably Colonel Craig Firenze, but the more observational sections come from Nell Murphy. The scene is mostly Brighton, Massachusetts, although there are some scenes in Houston or in downtown Boston, plus a chapter is set mainly on an aircraft flying from Houston.

In a lot of ways, the story more or less takes place in my house.

There are about a dozen characters of note, mainly listed in order of importance:

There are a few other named characters but these are seen the most, although Jackie and Shelley are only in one chapter. Which happens to be the same chapter. The last six on the list do not get a POV chapter.

He started to dump the corn into a bowl.

Mink came into the kitchen. “What’s left in the cabinets?”

“Green beans, some tuna, I think I saw tomato paste in there,” Dez said as Mink opened the cabinets and started to look for herself.

“There’s pumpkin pie filling, too, and we still have peanut butter. I wish we had bread.”

“Want some corn?” He offered her the second bowl and fork.

“Yeah, sure, thanks.” He dumped about half of his bowlful into her bowl. “Kitty, what are you gonna have?”

“If we had eggs, we could make French toast, if we had bread. And a working toaster. Aunt Doreen used to say shit like that.”

Mink just shrugged and ate as did Dez. When they were done, she bussed the dishes to the sink and washed them, and then started to wash the other dishes. “Man oh man, we don’t have to live like pigs. Can somebody dry?”

Kitty made a beeline out of the kitchen. Dez came over. “Just leave ‘em on the rack. I can get ‘em later.”

So Mettle has an MA rating. I am not kidding. While there are no sex scenes (a few are implied, though), every single main character has a potty mouth. Plus there are any number of violent scenes. Some are more graphic than others but the worst should be rather disturbing.

One thing which was great fun about this story was writing it with 9 1/2 points of view. I say a half because the first chapter is mainly news stories. So that one doesn’t quite count. And I have changed it to add little scenelets but the common thread is the news.

Each chapter worked as a separate POV. This is a style of writing I had not attempted before. And I found it exhilarating but it’s important to not confuse the reader. So I would really love to get beta readers on this one!