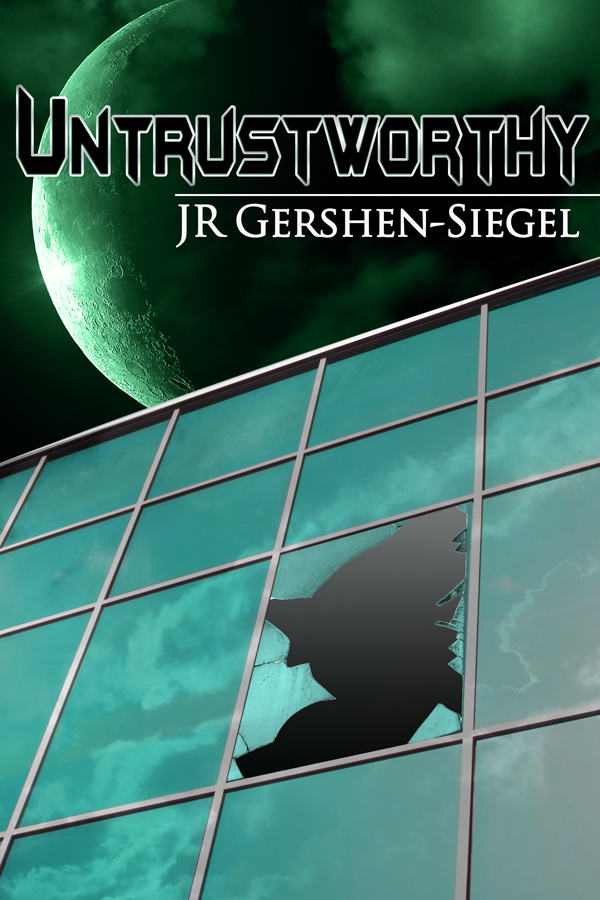 Untrustworthy is my first-ever published novel.

Much like a fan fiction novel called Reversal, it begins with a dream. And that makes perfect sense, as a dream inspired it.

And the dream, originally, was of seeing scenery change before my eyes (I have had this same dream before, and have written about it before, yet in different ways every time).

Yes, I am well aware that this is a cliché.

As Tathrelle begins the part of her life related by the story, the reader sees flashbacks of what seems like a dream and then seems like an earlier existence. However, the older life gets cut short in favor of the new. Tathrelle’s waking life, instead, centers around her wife Ixalla, and the children they are about to have. Past is prologue.

The Cabossians, a species made up by me, can have children in any combination, so long as both parties are fertile. Hence both mpreg and all varieties of marriage (same- and mixed-sex) figure in the plot.

Furthermore, Tathrelle’s new job drives a lot of the action, as she has won an election and represents the people in what obviously starts off as a military dictatorship. Also, in the background, a disembodied voice tells the people what to do. The first statements come out more as helpful hints and requests, such as to thank the public transportation driver or set the thermostat to a particular setting.

But that’s all about to change.

The main characters are Tathrelle, Ixalla, Velexio, Adger, and Students Number Five and Seventeen, along with a character just referred to as the unknown girl. The scene is solely on the planet Caboss, in the Central City.

One thing that surprised me as I wrote is that the main character, Tathrelle, did not turn out to be my favorite. Instead, that honor belongs to Ixalla. Ixalla was originally not much more than an expository mouthpiece. She really took flight when she became a revolutionary.

Ixalla yelled to them all, “This is the very last vestige of your privacy, and it is going up in smoke! You are all voluntarily giving it up! And for what? Is it for some vague notion of security? For the new requirement that anyone who is fertile is not just privileged, but that they are – we are – somehow, now, required to prove our fecundity? What will we have to prove next?”

The inspirational song for this book is Bastille’s Pompeii. Years later, and I am still incapable of hearing the song without thinking of the book, and vice versa.

Unlike any other works in this blog (as of now), this story is for sale. It is not truly ‘posted’ anywhere. Even on the NaNoWriMo site, all you can find is a very short snippet.

The story is Rated T.

Without giving away more of the plot, I think the story is okay but the truth is, I have written better since then. However, it is a great first effort for publication. Furthermore, I feel it works in some ways to get me into the publishing game, but then what? I feel the book had pretty good promotions but not great promotions. I know it has more reviews than a lot of other indie works, but not as many as others. Sales come few and far between.

In the meantime, I write about different things. Can Untrustworthy serve as an entrée for diverse works such as the space opera of The Enigman Cave, the science fiction detective stories in The Obolonk Murders and its successor series, the Victorian urban fantasy of The Real Hub of the Universe and its two sequels, or the odd science fiction dystopia of Mettle?

Stay tuned, and thank you, as always, for your kind and unwavering support.