It’s all over but the shouting, and most of the shouting is done, too. So it’s time for some analysis and Wednesday afternoon quarterbacking.

This campaign was more shaped by social media than any other campaign has been in history. I have little doubt that 2016 will be even more entrenched in the online world. And what have we learned? Let’s see.

I seriously doubt there is anyone on the planet who doesn’t realize just what a juggernaut FB is, but if you needed any convincing or confirmation, look no further than the campaign. Both sides (er, sorry Jill Stein and other third-party candidates but … srsly?) used and overused FB for their own ends.

Messages to the Faithful

These were all over Facebook, often coming in about four or so times per day. This ensured a steady stream of information and rhetoric, on the top of everyone’s feeds whenever they could get onto the site. Checking before work in New York? Gotcha. Lunchtime in Chicago? All set. After work in Denver? We got your back. Insomniac in Los Angeles? Just getting up in Anchorage or Honolulu? Hey, you’re covered, too. I can’t think of a day when I didn’t see several messages showing up.

Some were undoubtedly created by the candidates’ own committees, but a lot of them weren’t. Plus related groups, like the Occupy Movement, got into the act, often sharing the same information. Stuff went viral really, really quickly.

This was likely the most creative and impactful use of Facebook. Your opponent said something dumb or weird? A meme was created quickly, often with a silly image attached to it. This

one is one of my favorites, as it is more or less bipartisan (frankly, I can’t recall another meme that was more or less poking fun at both sides at the same time. If you know of one, lay it on me).

What I love about this image is how it brings all of it together and more or less pokes fun at every bit of politics. Bill Clinton is present, at his horndog best. Barack Obama looks tired and not amused, chagrined, even. And of course the statement was made by (or, rather, it was heavily implied and then everything was amped up to infinity) by the guy who isn’t in the picture – Mitt Romney.

Beyond the memes, there were the images. For the President’s victory,

he chose a stunning image that was easy to relate to. Perhaps as interestingly is the fact that the image is anything but political. I’ve seen this image shared in lots and lots of places already.

For Governor Romney’s concession speech, I like this press image and hope he finds a way to use it in the future. It gives a very warm sense of family. It also rather 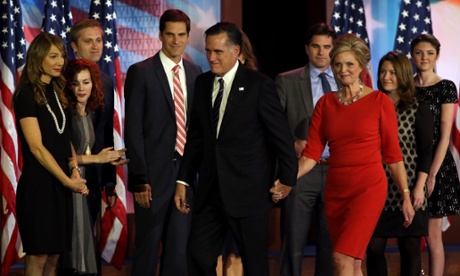 neatly shows there is the physical differences in his family, a fact that, I feel, never really came across during the election. Of course a candidate’s family isn’t running. Or are they?

Twitter skews younger demographically than Facebook does. It’s definitely not the place for long speeches. Link and go, or add an image link and you’re outta there. But Twitter still had its moments.

Woe to Mitt Romney the day someone in the Obama campaign came up with #Romnesia to cover the Republican candidate’s evolving positions! It sounded a little like a country, and a little like a disorder. Romney was dinged either way – either it sounded like he was remote at best and forgetful at worst. Not a good combination.

Obama was just moving faster on Twitter, and a good part of that was that people who weren’t officially “working” for him were tweeting and re-tweeting for him just the same. A secret weapon named George Takei really helped – and Takei didn’t even tweet much more than he usually does. But Takei is a master of FB and Twitter, with an enormous legion of followers (almost half a million on Twitter alone). Also key, I feel, was that supporters like Takei often didn’t carpet bomb their followers with political tweets. Instead, intermixing some political content with a lot that wasn’t political seemed best. You could look at a stream and, if you didn’t favor the same candidate, still find a lot to like.

It had a smaller role but it’s not completely out of things. President Obama has a LinkedIn profile. So does Governor Romney. Curiously, Romney’s has more recent activity, although some of that could be from what may have been some catch up that needed to be done (as I recall, the President had a LinkedIn profile the last time he was running. I can’t comment on when the Romney profile was created). Interestingly enough, the Romney profile experience is written in the third person, whereas the Obama experience is in the first person. Now, I really doubt that the President filled in his own LinkedIn profile. But the use of the first person sure makes it look that way, and gives it more of a feeling of a desire to connect, versus an obligatory social media outpost duly handled and nurtured by a campaign worker (although undoubtedly both of these profiles are).

For Governor Romney, his page is colorful but has little interaction. And someone should be moderating the comments! The President’s Google Plus page also has some commenting issues, although not as many as I noticed on Romney’s. In truth, both are somewhat scattershot collections of images, soundbites and short videos, but that’s the nature of the medium.

This much newer (and smaller) medium skews rather heavily toward women.

The Barack Obama set of pins has a lot of repetition, but

some are fresher images, including this meme. Much like with President Clinton during his initial run and the beginning of his first term in office, President Obama works in an appeal to youth by flashing a lot of pop culture references and inside jokes.

is more serious, but this official photograph also makes several appearances and is a very humanizing image.

As I look at the official, semi-official and repeated imagery from various social media sites, I wonder where it all was during the Romney campaign.

While Facebook and the like can often skew perceptions (we “like” this, we “collapse” that), the overall picture should still get out there. And it didn’t, at least, not when it came to the challenger. Will this become an equal time issue? It just might.

Gaffes and Misstatements and Sound Bites, Oh My!

This campaign, like every other campaign before it (and, undoubtedly, like all that are to come) was a gaffe-rich zone. Some statements, to be sure, are more harmful than others – and some aren’t accidents at all.

Statements about the 47% were extremely damaging, and were repeated and built upon again and again. See Romney on the 47% for details. The same was true about Mitch McConnell’s statement that the top priority of the GOP was to deny the President reelection.

Introducing his running mate, Paul Ryan, as “the next President of the United States” was a small slip of the tongue, but social media grabbed a hold of it and wouldn’t let it go. The President looking tired or annoyed ended up in images that were passed around and went viral. And then there’s what was said by people further down the ticket. Romney was hampered by Todd Akin and Richard Mourdock’s statements on rape. Did he do enough to counter them? The only poll that counts says no. And those little sound bites absolutely came back to bite him.

Debate zingers went viral quickly, too. There’s the “binders full of women” statement, referenced above, but there were also references to “horses and bayonets”. This campaign has lore that will be discoverable on Google for decades to come (should Google exist that long).

While they aren’t (really) social media, they are a part of candidate messaging. For the first time in my living memory, I was not bombarded with snail mail. I received one item – it was a bumper sticker – and then only because I got onto a particular mailing list. Plus of course this is an article that cannot be emailed. Hence, interestingly enough, aside from salaries, most of both candidates’ social media campaigns was free.

As for email, that was much more of an issue. My inbox was inundated, and I know that was true for others. For so many things that were handled so carefully by both of the candidates, email was like a dropped ball. It should not have been used with the frequency of Twitter and Facebook. The campaigns should have dialed it back several notches, and I suspect they will in four years.

I don’t envy the people who run for public office. And the ones who serve live in fish bowls. But with social media, the horse races of the past couple of centuries got a new and different spin. Let’s see what happens in two, and then four, years from now.