I’ve been running through life lately by shooting along at seventy gazillion miles per hour, and it’s catching up with me. 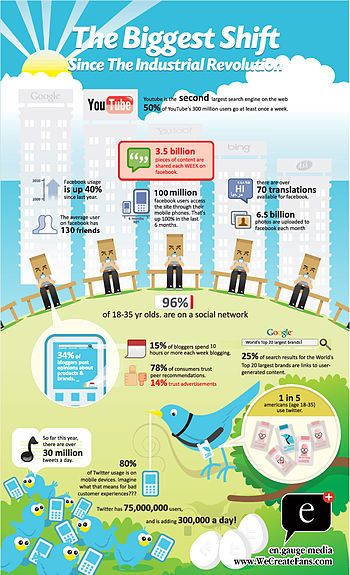 English: Infographic on how Social Media are being used, and how everything is changed by them. (Photo credit: Wikipedia)

I suppose that’s to be expected. After all, hurtling along like that should, eventually, lead to some form of burnout. So I am looking to cut back.

Now, I love to write. I truly, madly, deeply love it. But lately it’s been something of a chore to get the blog out. It’s been — oh Gawd, I’ve gotta do this again? And that’s led to, what are to my mind, some less than stellar blogs.

Less Conversation With Who, Exactly?

Perhaps you have noticed them, or maybe you have not. Or you are too polite to say so. Or, I am just talking to myself. I don’t discount that as a possibility, either. And that’s fine, too. Hey, it happens.

But in my head, some of the joy was getting sucked out because it had turned into much more of a chore than a labor of love. And – gasp! – I had been running out of things to say. Things had stalled, and I was floundering, and it was all moving more slowly and I am sure that you all don’t want to hear, yet again, about my exploits shoveling snow — fascinating as they may be.

It’s silly to merely pump out content for the sake of pumping out content. I want to write when I have something to actually say. And I suspect you – if you are out there – would much rather read my blatherings if they have a coherent point and a purpose.

So here I am, disengaging a bit.

The mountains will not crumble. The seas will not boil away.

And Social Media will be there when I get back.

Thanks for listening. I’m never too far away.