Television and the Internet

Nielsen estimates that there are some 115.6 million television households in the United States. According to the US Census, over ¾ of all households have at least one computer, and about 95% of those households use it to connect to the Internet. That’s about 122 million households. It’s clear that many American households have both. 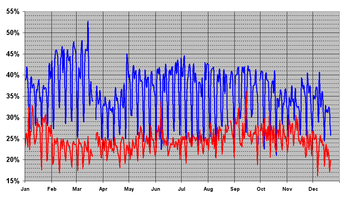 English: Primetime television ratings for 2008 in the Philippines: Blue = GMA Red = ABS-CBN The charted points represented the TV program that had the highest rating for that station for that day. (Photo credit: Wikipedia)

Nielsen has had some issues in counting Internet viewing in its ratings systems. A part of this is due to differences in the advertisements delivered (if any), and part is due to pirating.

However, Nielsen appears to be, if not getting the details and minutiae quite right, is at least getting the essence correct. What it lists as popular really is popular (although the degree of popularity might not be perfectly represented). As Engler, C. (2011, January 20).

The truth about TV ratings, online viewing and sci-fi shows.

As recently as 2013, Nielsen began making the effort to better include online streaming and other means of television content consumption. As Kelly, H. (2013, October 28). Nielsen adds web viewers to its TV ratings. CNN.com. [Link] says, “Shows that don’t include the same ads online as on TV will be counted as part of separate Nielsen Digital Ratings. Shows streamed directly by networks through their own sites and apps typically include the same set of ads, and those viewers are counted towards the traditional Nielsen totals.”

Nielsen’s main purpose is to count program viewership for the purposes of understanding advertising potential. E. g. the more viewers, and the more sustained viewers, the more a content provider can charge for commercials. Hence the need for a connection between online and offline delivery that includes the same advertisements.

The networks and other content providers need to, as closely as possible, compare apples to apples. Comparing the delivery of different commercials makes it that much more difficult to achieve a reasonable comparison.

If Nielsen’s purpose were purely to measure viewership without wedding it to advertising, counting clicks and downloads would be easier, and it would not matter what was advertised during any delivery of the content.

Piracy also wouldn’t matter quite so much, at least not vis a vis counting an audience. But speaking of piracy …

For networks and other content providers, piracy was and is a huge issue. When we talked about copyright and copyleft, the question arose about the grabbing of content. Who enforces copyright? Who pays when it’s violated? And are the punishments excessive at all?

The uneasy marriage of television and the Internet has spawned an interesting child – Hulu. After all, why were people pirating televised content in the first place? Perhaps, as DVRs made time shifting possible, it was just to allow for platform-shifting.

Hulu arose as a response to that, and a way to monetize a far better version and offer it to a paying customer. The thinking was that quality would be its own advertisement, and that most people just wanted a platform shift. They didn’t want to steal from artists or cheat networks. As Braun, J.A. (2013).

Going over the top: Online television distribution as socio-technical system. Communication, Culture & Critique 6(3), 432–458. [Library Link] says, “With Hulu, the networks decided they would instead attempt to draw viewers away from pirated content by hosting higher quality versions of the same videos themselves, while selling advertising against them in an attempt to reclaim some of the revenue they believed they were losing to other sites.”

Most People Are Honest

Many users are more than happy to receive a better quality product and pay a commensurate fee for it. But there are still some who insist on pirating, practically seeing it as a right. As Newman, M. Z. (2012). Free TV: File-sharing and the value of television. Television & New Media 13(6), 463–479. [Library Link] says, “Sharers [also] insist that DVR recordings and downloads are ethically equivalent. The difference between recording a show oneself using a VCR or DVR and skipping commercials and downloading a commercial-free file via BitTorrent is regarded as ethically insignificant.” (Page 469)

So, what is it? Theft? Sticking it to ‘the man’? Platform-shifting by (more or less) innocents? As the debate continues, it shifts away from ethics and morals and into monetization. If content providers can make a little cash even from peer to peer networks, and pay artists, can they continue to claim that they’re being harmed?