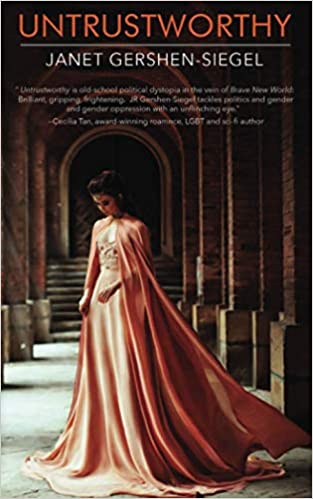 Consider Ixalla, One of My Original Characters

When I first started to write Untrustworthy, the idea what that Tathrelle was going to be the main character. But I fell in love with Ixalla. Now, Tathrelle is still the protagonist. But her wife became something more while I was writing her.

Where Did Ixalla Come From?

The circumstances under which I wrote Untrustworthy are maybe a little odd. The main idea for the book came to me in a dream, as some of my book ideas have. But initially, the only ‘face’ I saw was Tathrelle’s.

In fact, there originally wasn’t a lesbian relationship. But as I got to know the characters and the plot (and keep in mind, I was writing this during 2013 NaNoWriMo, so everything happened a lot faster than it usually would), Ixalla started to take on more importance.

The Past is Prologue — Backstory for Ixalla

The truth is, there isn’t much of one. Unlike Tathrelle, Ixalla just kind of appears fully formed, as if she was the armored Athena springing from the head of Zeus.

When the story starts, all we really know about her, apart from her being pregnant, is that she’s a schoolteacher. She teaches the Tenth Form which is meant to be the high school level.

Without giving away too much of the plot of Untrustworthy, Ixalla’s appearance does change within the context of the story. When we first see her, she has blonde hair and blue eyes. But later, she has brown hair, and reddish eyes.

Oh, did I mention that she’s an alien?

Yep, Ixalla is a Cabossian. There are no humans in that book. None!

So, there’s really no actress who I can point to and say, “That’s Ixalla.”

As for how she sounds, the aliens in this book have very stilted speech—and that’s the idea. They’re aliens. They shouldn’t be talking, acting, or looking like us.

“Student Number Five!” Ixalla exclaimed, “I will remind you of the rules. You are referred to by a youthful number and not by name, and there is a very good reason for this. It is because students have varying degrees of wealth and status. By using your youthful number designations – and those are your classroom designations, and not your actual numbers, which will come when you are of age – we can educate everyone, regardless of whether their parents are in the government or drive a transportation sleigh. As a result, you cannot speak about what either of your parents does, or even if both of your parents are male, or they are both female, or if they are mixed. I trust I make myself clear? Or would you prefer having the Lead Educator explain it to you again?”

Ixalla’s main relationship is with Tathrelle. But as the book goes on, Tathrelle is essentially taken away from her. When Ixalla leaves, an authority officer flirts with her. But it’s nothing serious.

And even later, she essentially adopts two lost children. One is just called Student Number Seventeen, whereas the other has even less of a designation. I just called her the Unknown Girl.

Even though she’s technically not the main character, Ixalla essentially picks up the main thread of the narrative. She acts as the main character whenever Tathrelle is off-screen. Hence the conflict for her is virtually the same as Tathrelle’s—something is changing their world, and those changes are not for the better.

For Ixalla, the turning point comes when she arrives at the school drunk and yells at the Tenth Form. She starts off as an outsider and spectator and the kind of person who doesn’t get involved.

And then she becomes a revolutionary.

This work has the least amount of continuity with my other works, as it kind of can’t. The characters are far too different and the scenario is way too dissimilar. Hence there’s little to no continuity with her, or cross-referencing.

One of the closest characters to her in another universe is possibly Elise Jeffries in Mettle. Elise is just as intelligent and is also a not-so-main character who gets a lot of airtime anyway. But that’s about where any similarities end.

Again, without getting into spoiler territory too much, I can’t have future plans for this character because the book is, at heart, a tragedy.

But I love her spirit, how she goes from being domestic and intellectual to a street smart, resourceful, scrounging survivor.

For this character, I think the main form of inspiration I can get from her is the idea that a character can even surprise the writer. You may have certain plans, but it’s the character’s voice and the character’s desires that will win out in the end.

Ixalla showed me that she was more than just a place to bounce Tathrelle’s thoughts off. And once she had showed me that, she became three-dimensional.

For this character, perhaps my favorite bit about her is that she was never intended to be this big and this vital. But after a few days of writing her and Untrustworthy, the genie was out of the bottle, and she became more.