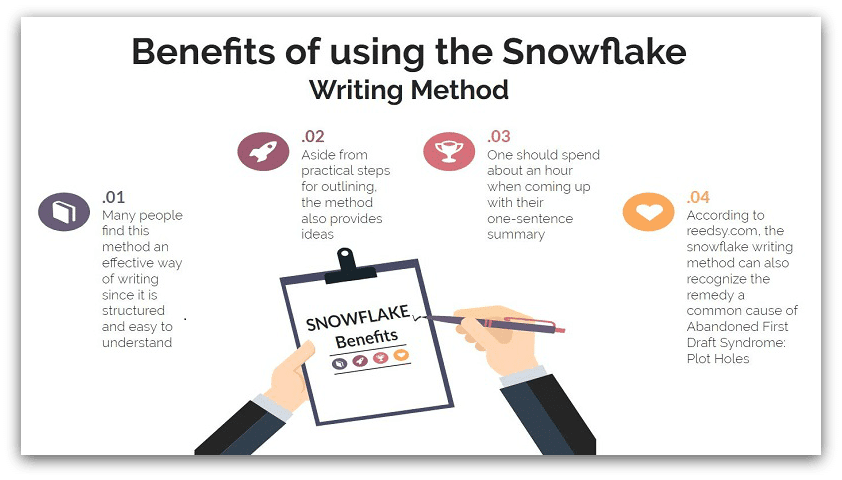 Categories:Writing
by Janet Gershen-Siegel |
on November 9, 2021

A Look at the Snowflake Novel Outlining Method, Revisited

Snowflake is but one method for outlining a novel. It’s not the only kind, and your methodology is probably best for you. But this is what I do.

I do a variation on snowflake. Do this on paper. I’ve never been able to do it on a screen and I think paper gives some semi-permanent feelings. But if you can do it on a screen, then have at it.

The First Snowflake Falls: Getting Started

1) Start with a concept. Let’s say the concept is that the world has run out of pumpkin spice.

2) Name a main-ish character (this can always be changed). So let’s go with a sapient chipmunk.

3) Write the main character’s name in the center of a page and circle it.

4) Write the concept down as well, maybe at the top of the page and circle it.

The Next Snowflake Will Fall: Making Connections

5) Draw 3 lines between them, but fewer if it’s a short story, more if it’s meant to be a series.

6) Along those lines, write possible connections. But don’t worry about them sounding stupid. Your sapient chipmunk might be hoarding it (and thereby is the villain). Another option is they might be searching for it as some sort of chipmunk holy quest. Or they might stumble upon it by accident. It could be that they might have to pay it as ransom to the mean squirrel which kidnapped their baby chipmunks, whatever.

7) So now you’ve got more characters and more scene concepts.

8) New page of paper. Same name in the center, circled. Now surround it with the names or at least descriptions of the other characters you came up with. In this case, the mean squirrel, whoever sent the chipmunk on the quest, whoever hid the pumpkin spice treasure our heroine stumbles over, the kidnapper, etc.

9) Draw connecting lines to the main character and, as before, write along those lines what the connections are. And do this even if you already have them written elsewhere. Otherwise, you’re going back and forth between pages, which is a pain.

10) Third sheet of paper: do the same with the concept and possible scenes. So these are scenes like the dramatic kidnapping, receiving the ransom note, a news story about the spice theft, the stumbling, etc.

11) Fourth sheet of paper: take your scenes and put them in as coherent an order as you can and number them accordingly. Plus this can be changed. You’re just getting a rough idea here. So #1 kidnapper makes plans. And #2 spice is stolen; #3 meet the chipmunks, etc. Maybe you need to go back earlier to when the kidnapper first thought of the idea of kidnapping – that’s scene #0. Hence maybe you want the news story between #2 and #3 – then rename it #2a and move on.

Snow Showers: Moving Onto Your Computer

12) Transcribe the scenes into a word processing document. I use Word; some people like Scrivener or Google docs, etc. In addition, continue to reorder the scenes and see where the filler and the exposition go.

13) Transcribe the character types and any names you’ve got. First of all, you’ve got to get across that the chipmunk heroine is sapient. So does she have an amazing backstory? Sketch it out. Because it may or may not end up in the book. Sometimes a backstory doesn’t need to be explicitly stated, but if you know your chipmunk was an escapee from a science lab, that might inform how you write her.

Just because you researched or thought of something, does not mean it absolutely must end up on the page.

14) Time to figure out who does what. Hence maybe the crow delivers the ransom note, or the wolf acts as the squirrel’s henchman and does the actual dirty work of kidnapping.

15) Keep refining and go back to the paper if you need to.

** Note: a lot of people who don’t like outlines feel they have to show every single little thing planned out. But this does not have to be true. Because all you really need is a general idea for a scene, like chipmunk babies are kidnapped, pumpkin spice shortage reported in the news, etc. Just know what your scenes’ purposes are.

Post-Storm Clean-Up: Do You Really Need That Scene or Character?

A scene should have one of two purposes (it can have both):

So any scenes which do neither get scuttled or altered.

Lather, rinse, repeat. This is my version of the snowflake method. But it’s not the only way to write a snowflake novel.