Self-Review – There is a Road 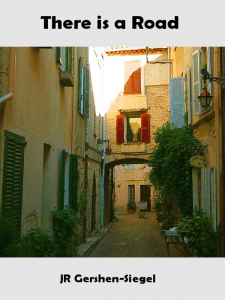 Categories:Writing
by Janet Gershen-Siegel |
on January 7, 2021

Review – There is a Road

There is a Road originally came about as a response to an image prompt on the old Trek United. However, I do not have the rights to use that image, and Trek United is a mere shell of its former self.

The original image was a dreamy almost black and white, very shades of gray type of image. It was a wooden pathway into the woods, bending and seemingly with no ending.

There is a Road, exclusively on Wattpad

The narrator is never named. She talks about her grandmother’s death from smoking, and her father’s from a transport accident. She mentions aliens and flying. Hence the time must be the future, and perhaps it is a rather deep future versus right now.

And then the narrator talks about making art. As she describes her process, the reader begins to understand that the narrator has screwed something up royally. Whether there has been an explosion or a fire, it hardly seems to matter. Because all that matters is that (spoiler alert), the narrator numbers among the dead.

The only character is the unnamed narrator, although she refers to her father and her grandmother. Since it’s a narration, it doesn’t really have quotes.

This story is really only available on Wattpad.

The story is Rated K.

This story is odd and dreamy and probably a little too spiritual for regular consumption. Also, there is just no way it could ever get a sequel or the like. Could I take it off Wattpad and submit it to an anthology? I suppose I could but, frankly, I do not think it stands as one of my better works. The piece is old and the seams do show. Still, it is an interesting premise, and perhaps I should rework it one of these days.