This week’s readings were about evaluating a strategic plan and program.

As Smith said, on (Page 331), “Program evaluation is the systematic measurement of the outcomes of a project, program or campaign based on the extent to which stated objectives are achieved.”

With a plan in place and measurable, clear objectives included in it, the next question is whether anything is working. This comes from figuring out how to measure results and what’s ‘good’ or at least adequate. In Module 8, we studied Cans Get You Cooking, where the idea was to increase awareness of cans’ use in cooking via cooking shows and blogs. However, another objective was increased sales (after all, why bother with such a campaign if sales don’t increase?), and in that respect the plan was unsuccessful. According to Companies and Markets, the purchase of canned goods declines because of improvements in the economy. When consumers have more discretionary income to spend on foodstuffs, they purchase fewer canned goods – no matter how well-crafted a campaign is. There was increased awareness, yes, and under that criterion, the campaign worked. But under the criterion of increased sales, it did not. It seemed a little as if the goalposts were moved in that campaign, that increased sales were seen as being a less attainable goal. Awareness was a far more readily attainable goal, and so awareness was presented as being the premise behind the campaign.

These moved goalposts are the difference between what Smith refers to as awareness and action objectives, on pages 332 – 335, with the third type of objective, acceptance, straddling a line between both of the others. For the Cans Get You Cooking campaign, it seems as if the attainment of the awareness objective was the only cause for celebration.

Smith makes a compelling case on page 334, that creativity, effort, and cost don’t count as measures of effectiveness. All of those facets of a campaign are on the side of the organization, but measures of awareness, acceptance, and action are all effects felt (and acted upon) by publics. By definition, creativity, etc. should not be seen as having anything to do with the effectiveness of a campaign. 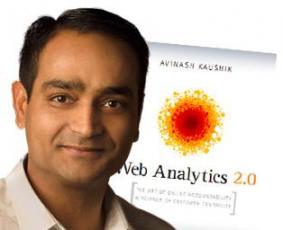 What Kaushik said, and what Jeffrey said, are similar. Measurement is an objective activity. This is why objectives need to be clear and measurable. Five percent is measurable; better exposure (in general) is not.

For both authors, the idea is to have specific objectives and then act on them, whether those objectives are to launch a strategic campaign or select a web analytics vendor. Then, once the vendor is chosen, get the yardstick in place, and use it. Kaushik further reminds us that, while our intention may be to select a vendor and essentially ‘marry’ it, we still need to be evaluating the evaluator. If it’s not performing up to our reasonable specifications, then it’s time for vendor divorce court.

On page 7 of Jeffrey, it says, “Shel Holtz, principal of Holtz Communication + Technology (www.holtz.com) defined a KPI as a ‘quantifiable measurement, agreed to beforehand, that reflect the critical success factors of one’s effort.’”

This puts KPIs on a par with what we have been referring to as objectives. Wanting to ‘get better’ is one thing. But it’s vague and subject to weaseling. Wanting to improve recognition of the Institute for Life Sciences Collaboration  (ILSC ) and its missions by 5% as is measured by surveys taken during the second quarter of 2016 is a measurable key performance indicator. Anyone who can read numbers will be able to determine whether the KPI has been met.

Applicability to the ILSC

Beyond just recognition measurements, there are any numbers of KPIs which can be measured, including the number of schools served by the Small World Initiative by a certain date, or increasing donations by a particular amount, subject to a clear deadline.

Currently, the ILSC website in particular seems to be just sort of thrown together without any sense of how to deal with technological and design changes, or scalability. Keeping measurements out of the mix means that the ILSC website can be tossed up and then forgotten about – and it seems a lot like that’s exactly what happened. However, a website cannot be a flash in the pan, as that can cause the publics to feel the organization behind it is also fly by night. Particularly when asking for money, an organization needs to give forth the impression of trustworthiness and solidity.

Adding Key Performance Indicators and measurements means there needs to be a sea change in how the ILSC views the website. It isn’t just something thrown together in an afternoon, to be handled by some temp hired for a few weeks and then never seen again. Instead, it needs to be an integral part of the organization. While the organization’s work is (generally) offline, there still needs to be room for the website in the minds of the organization’s board members. One facet of their thinking has to include how to best utilize the website and social media, in order to better communication the ILSC’s mission and goals, and to communicate with its publics. The website has got to have a place in those conversations, and it currently does not. That has to change.