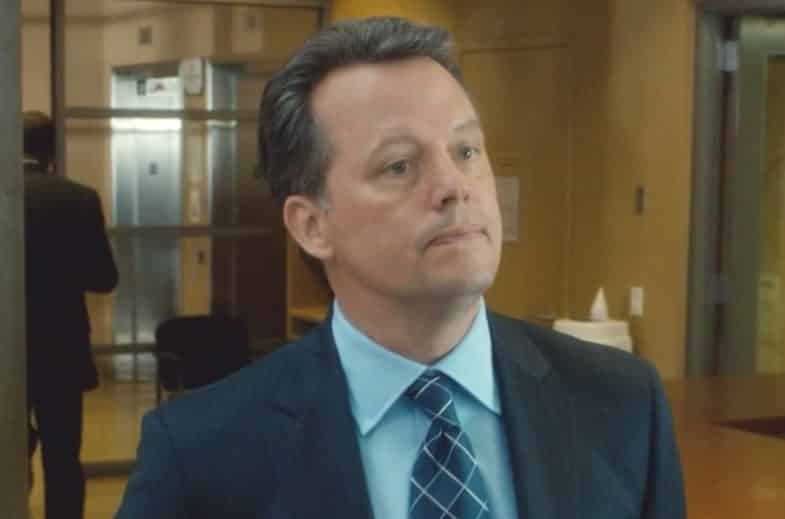 Categories:Writing
by Janet Gershen-Siegel |
on November 22, 2022

Consider Tommy 2000, One of My Original Characters

Tommy 2000, AKA Tommy McFarland, is the kind of police officer you want on your side. A powerful genius who cares about people.

Except he’s not a person. He’s a robot.

All of the original Obolonk Murders was written about 20 years ago and I was utterly winging it.

He started off as just a cool robot, able to morph. But then I learned, as I was writing him, that he would be a lot more than that.

The Past is Prologue — Backstory for Tommy 2000

When we first meet him, he’s being fully activated for the first time. But he does tell Peri that he recalls a few brief earlier moments during programming. Peri quite literally is his entire world.

This makes her loss, between the original Obolonk trilogy, and Time Addicts, all the more devastating.

I have always seen Steven Culp when I think of Tommy 2000.

And that is exactly what I was thinking of when I originally wrote his description. Tommy is meant to look like a character actor. Someone who is known but not know.

Tommy’s sole purpose is to help and protect Peri. He will do anything for her, including potentially give up his own existence.

For her part, Peri initially finds this annoying. She rather pointedly and specifically tells him to stop conceding every single point to her.

For them to work together well and efficiently, they need to have differences of opinion. She does not need a reflection of herself.

When the original trilogy ends, Tommy is more of a partner to Peri. When we get to Time Addicts, he is her widower.

And, he has a position in government. Much like the Obolonks’ own They Say This is the One (TSTITO), Tommy is the only ‘ruler’ of sapient and semi-sapient robots.

Because, so long as he has access to replacement materials, he can theoretically never die, he just stays on in a leadership capacity.

For the third of the trilogies, I will probably change him up again. But I am not so sure how I will do that just yet.

Quotes (original Obolonk trilogy; Peri and Tommy are discussing a terrorist organization, HEART, run by an anonymous person they call the Farm Boy)

“Yeah, there’s also the plastics from Carolbots. And you probably don’t want to transport a completed bomb so maybe you ship the parts or maybe they’re even developed on site. That means infrastructure, and it also means training. This all spells a rather expensive long-term operation.”

“If that is occurring,” Tommy said, “then there may be issues with all robots that were repaired or manufactured within the preceding ten-to-thirty-month time frame.”

Peri was silent for a moment. “Then that includes you, and possibly also Selkhet, right?”

“It is not outside the realm of possibility.”

Peri swallowed hard. Have I just fed a bunch of our plans to the Farm Boy? “Would you even know if you’d been at all compromised, Tom?”

“I am unsure. The thought is rather … unsettling.”

“Why don’t you tell me about yourself.”

“I don’t think there’s much to tell, Mr. McFarland.”

“What should I call you, then?”

“Tommy is fine. In return, can I call you Jolene?”

“Oh, this wasn’t in my briefing materials.” He looked up again. “Ah, there it is. You’ve had this nickname since second grade.”

So you’ve got access to my elementary school records. I bet you can see everything else.

Who am I kidding? Of course you can. You’ve got Alpha-1 clearance. I bet you know when I got my wisdom teeth taken out.

“Since you probably know all about me, isn’t this kind of a pointless exercise?”

“I don’t think a Juliebot would quite get into this level of detail.”

“I know they wouldn’t. Selkhet and I put together their programming protocols ourselves. And then those were agreed to by the Chief Governor, the head of the OIA, and an older Obolonk called We Say This is the One. It had to be unanimous.”

“Just when did this happen?”

For a being made up on plastics and polymers, he has any number of relationships over time.

With Peri, he grows from a hovering, deferential, almost-nosy servant to her loyal and equal partner. Tommy gives her stability, love, and the kind of intellectual banter she craves. He experiences true grief when she passes on.

In return, she loosens him up. She gives him tools to get along in society. Like in any good partnership, they make each other better.

For Tommy to really be a mature creation, he needs complex emotions. With Dave, he feels jealousy. As Peri puts it, he’s supposed to be like a loyal dog. But he doesn’t like it when she plays with other dogs. He never gets violent or anything. But Tommy is clearly wounded and he is short with Peri when she tries to talk to him about it.

In Time Addicts, there are a few timelines where the relationship between Peri and Tommy does not advance, or Tommy does not get to the next level. In those, Peri marries Dave.

What is anyone’s relationship with their creator? Jim is father, instructor, programmer, and creator to Tommy, Selkhet, and the rarely seen Emma 1000. And with Tommy, Jim has succeeded well beyond his wildest imaginings.

Made a bit before Tommy, Selkhet also has emotions but hers are more advanced than his. However, she is also more prone to breaking down.

By the Time Addicts period, Selkhet and Tommy aren’t dating. But she is generally his date for any functions.

During Time Addicts, they work together, although he’s no longer a cop. But he has a unique perspective. And, with her display tied to data chips he can interface with, she can effectively share at least some of her memories of other timelines with him.

This gives them a strong, non-romantic bond. He is the person who, without doubt, question, or reservation, believes her.

Like with Peri (and Dave, really), the turning point is when they get to Sedna. He sacrifices nearly everything for her. And in return, she does the same for him.

In addition, his basic internal structure changes. Perhaps it’s a bit of deus ex machina, but I wanted for him to evolve almost randomly.

Since I also see Jake Radford as Steven Culp, there is a bit of continuity with (of all things) The Real Hub of the Universe.

I don’t have him in either the prequel for Time Addicts or for the original Obolonk trilogy. His earlier life isn’t much. But his life in between the trilogies, and then between Time Addicts and the third trilogy, should prove interesting. Will I ever write that? I have no idea.

I strongly resisted turning this character into a latter-day Pinocchio. Far too many writers do that with android/robot characters, and that was not my plan for him. But he does change and grow. And, while he doesn’t necessarily become a “real boy”, he becomes, in a way, a better person than most human beings.