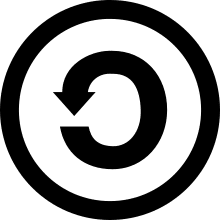 Categories:Quinnipiac
by Janet Gershen-Siegel |
on September 11, 2014

Copyleft? Way back, when intellectual property was fairly siloed, and hard to copy, it was not that difficult to assert copyright.

Actors and actresses plied their trades on stage or the big or small screen but the best anyone could do in terms of copying them was to either take a bunch of still photographs or pretend to behave the same way. Music could be replayed, or maybe recorded onto a reel to reel recorder or even a cassette. Books could be laboriously copied by hand or photocopied.

In all of these instances, the quality was extremely poor. The gulf was so great in terms of beauty and readability, not to mention access to distribution channels, that it was obvious which was the original and which was the copy.

Then came the Internet. As Boyle wrote, in (2008). The Internet threat. In The public domain: Enclosing the commons of the mind(pp. 54–82). New Haven: Yale University Press. [Link|Whole-book PDF], “The strength of intellectual property rights must vary inversely with the cost of copying. With high copying costs, one needs weak intellectual property rights if any at all.

To deal with the monk-copyist, we need no copyright because physical control of the manuscript is enough. What does it matter if I say I will copy your manuscript, if I must do it by hand? How will this present a threat to you?

There is no need to create a legal right to exclude others from copying, no need for a ‘copy right.’ As copying costs fall, however, the need to exclude increases.

To deal with the Gutenberg press, we need the Statute of Anne—the first copyright statute—and the long evolution of copyright it ushered in.” (Paragraph 20)”

Complicating matters is the fact that not only is copying simple, and widespread distribution a snap, but audiences are less inclined to be pure ‘audiences’ (e. g. listeners) in the first place. We tend to not passively consume content anymore, like we did as recently as the last century.

Instead, we mix and match and mashup and grab. This revolution in content experiencing has brought with it a desire to redo and remake much of what we see and hear. It’s not enough to lay down the opening riff of Rick James’s Super Freak into MC Hammer’s U Can’t Touch This.

These days, people photoshop Justin Bieber’s face into the Bad Lip Reading version of Game of Thrones, which of course is a YouTube video that scrubbed the original sound and added new lines, and edited and spliced together unrelated scenes, sometimes adding modern touches like a bullhorn for Sean Bean.

Baio, in his video (2013). Reuse [Video]. Presentation given at Portland/CreativeMornings, Portland, OR. [Link], cites Zach Barth of Infiniminer, who said, “The act of borrowing ideas is integral to the creative process. There are games that came before Infiniminer, and there are games that will come after Minecraft. That’s how it works.”

Baio further uses the Harlem Shake as an example of sampling – it’s been sampled several times and it is even a sample of a song that contains a sample of an even earlier song.

To Baio, the fan fiction writers and photoshoppers who add “No copyright infringement intended” as captions to their creations are not only not protected from suits, but their efforts to shield themselves are somewhat clumsy. Putting their creations online invites lawsuits. But cover songs are different and don’t need explicit permission. Instead, it’s just a quick fair use type of license. I found a way to do this for $15 via Limelight: https://songclearance.com/

Ironically enough, this mashup, copy, and reuse model is reminiscent of the kind of society that John Philip Sousa warned was going to die away when radios came onto the scene.

As Larry Lessig noted in his 2007 TED talk on laws that choke creativity [Video]. Presentation given at TED2007, Monterey, CA. [Link], he says that John Philip Sousa was afraid that we would stop being a read-write culture and turn into a read-only culture losing its creativity and left with only top-down creativity.

In the 20th century, a lot of our culture was passively receiving content. These days, we remix (this is different from piracy, as it’s a change in content to say something new) in a manner that in many ways harkens right back to Sousa’s time.

Why is it ostensibly better for remixing and repurposing to go on at home and not in the greater world? Perhaps every teenager has – or knows someone who has – made up some sort of song parody at one time or another. They may have written or read fan fiction, or retold a fairy tale or fable for an acting class. They may have worn a Halloween costume that spoofs a fictional character in some fashion.

Why does it turn into a problem when the fan fiction is posted on Wattpad, or the images of the Halloween costume go onto Instagram, or the song parody or fable retelling makes it to YouTube? Certainly some of these are concepts that are under the public domain, but not all of them are.

As a writer, I certainly don’t want to see my creations copied. This is why I am working with a publisher in the first place, to be somewhat protected by their Legal Department and to benefit from their experience and their Marketing Department.

But as someone who has also read a great deal of fan fiction, I can see the side that would prefer opening up copyright a bit more, or at least would assure that mashup artists would be recognized as just that, as artists, instead of being hounded as copyright infringers and plagiarists. Is there a middle ground? If there is, I’m not so sure I can see it just yet.