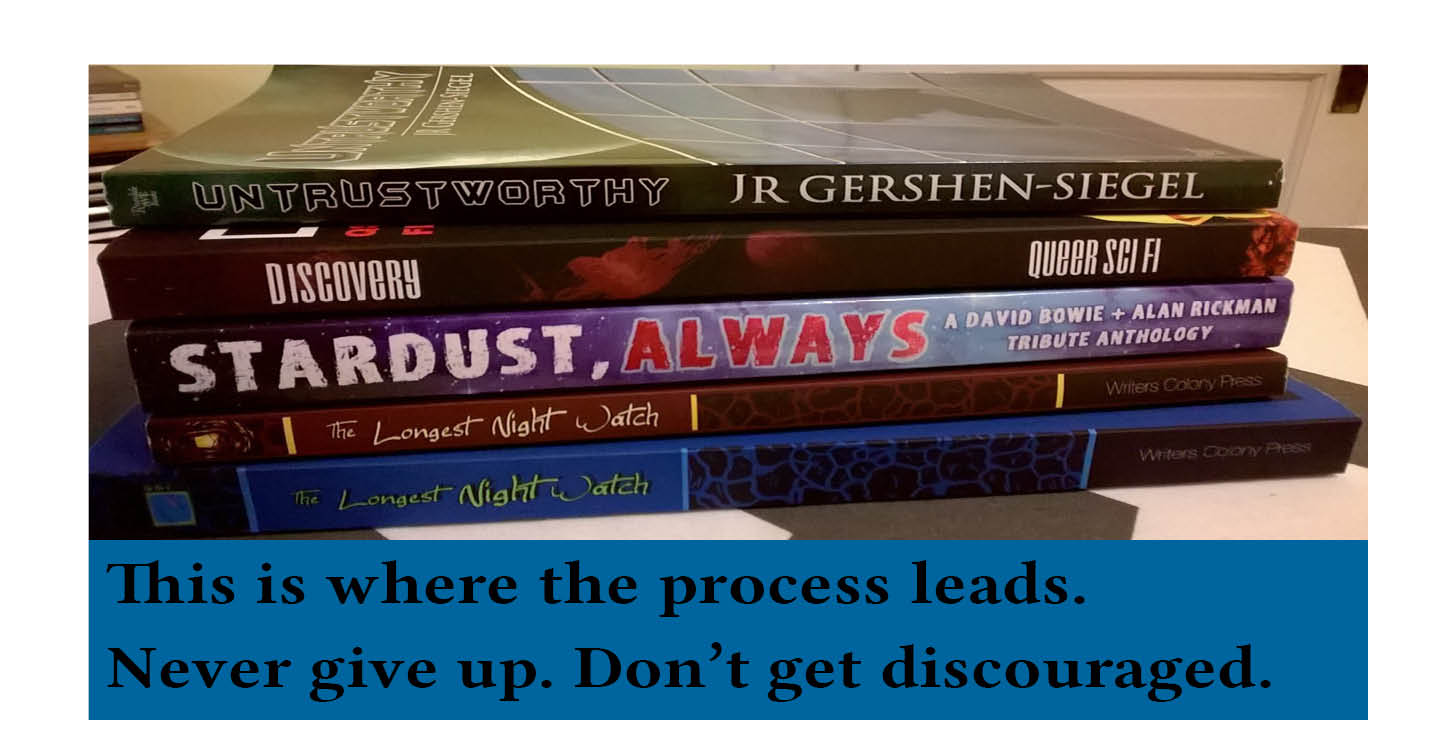 I hope you’re interested in writing progress reports. Because I will be adding them.

I love to write and I try to do it on a somewhat regular basis.

For 2018, one of my resolutions (a fancy word for plans) is to write a lot more like the late, great Ray Bradbury. Bradbury did two things.

And that’s a great attitude right there. For Bradbury, there was no such thing as writing 52 bad short stories in a row. Because, yes, those weekly writing sessions would turn into short stories. I am certain some of these did not sell nor see the light of day. Others did, and became parts of The Illustrated Man, etc.

Writing is also good practice for more writing. And I have also found that, at times, I have cribbed from an older work and stuck it in a newer one where it worked better. But I would not have had that bank without writing the older story first.

A Word About Fan Fiction

Egad, I wrote a ton of it! As in, over 2.5 million words – no lie! It wasn’t until around 2014 or so where I came to the conclusion that I had learned everything which writing fan fiction could possibly teach me, so it was time to let it go.

However, that cribbing I mentioned, above? I’ve done it with fan fiction the most. Obviously, I don’t copy the canon stuff which other people created. Instead, I use my own in new ways.

You’ll be seeing a lot about current WIPs (works in progress). The truth is that any work not yet published is technically a work in progress, for it can be altered at any time up until release, and that’s even after a successful query (a query is where you fling your work off to a publisher or an agent to try to get it published). A WIP even encompasses works tossed into drawers and kept from the light of day for a long time. So those will be in these writing progress reports although, I admit, sometimes they’ll just be a placeholder for “nothing much happened”. Because not everything is worked on all the time.

Writing is not all that there is to writing. Uh – what? What I mean is, you don’t just write. You research and plan. And you also edit and send out work to beta readers and address their feedback (which is sometimes to reject their feedback, by the way). Plus you put together queries and send them. In addition, you promote published works and collaborate with a publisher or an agent, a cover artist, etc. Or you self-publish. And you handle rejection. And bad reviews.

All of these are important activities. However, they are also all dependent upon writing. You can’t query without a written project. And you don’t get reviews on the dreams in your head. So writing is paramount, a good chunk of all of it. But these other things matter as well. If I may, I think this is a pretty decent breakdown:

Idea generation, preliminary editing, querying, and dealing with reviews are all small because they shouldn’t take too much of anyone’s time. Ideas are everywhere. Usually you’re stuck trying to choose among them. Preliminary editing is really just for glaring errors as you run spellcheck and also handle anything you know is a problem for you (for me, it’s the word ‘that’ and also too many characters saying ‘all right’). Querying is small because you really can’t simultaneously query most places, so you send a query out, wait a month, etc. Handling reviews, etc should also be fast. Don’t get cocky with glowing reviews and acceptances, and don’t let rejections and bad reviews get you down. Learn from all of these things and move on.

If you’re self-publishing, then querying is 0% and working with a cover artist should probably be a quickie 5%. The 10% you just saved should be shunted off to promotions because you’re it.

The Middle of the Road

Beta readers are important and perhaps I should give them more weight. It kind of depends. Some give detailed, helpful feedback. Others say nearly nothing or are s..l..o..w. Same thing with pro editors, and I do mean pros. Editing should be paid for. But if you’ve done good preliminary editing and gotten (and acted upon) good feedback from beta readers, then pro editing should take less time. And it might even cost less. As for time spent with a publisher, these days they are rather hands-off and that is especially true for newbie authors. Unless you’re JK Rowling, you’re probably not going to get the royal treatment. Particularly because publishers are so hands-off these days, you’ll have to pick up the slack when it comes to promotions.

Where the Rubber Meets the Road

Of course writing is the big one – it’s why we’re here in the first place!

I will do my best to write at least 1,000 words every day during odd-numbered months (January, March, etc.). This includes NaNoWriMo in November, when that number should rise to at least 1,800 words per day.

I will do my best to work on the ancillary activities for at least one hour per day during the even-numbered months.

Oh, and you’ll see writing progress reports at the end of every quarter, so look for the next one at the end of March of 2018. You will also see stats if I can put them together. And I will occasionally give you the specifics about the WIPs and published works (and will try to keep those spoiler-free) so you’ll have a better idea of what the heck I am talking about in these writing progress reports in the first place. Thank you for your kind support!