Categories:Book Reviews
by Janet |
on November 2, 2017

Google Advertising Tools by Harold Davis is one of those O’Reilly books, so it’s got an animal on the cover. This one is some sort of lemur or monkey. Not that that has anything to do with the subject matter but it ends up much nicer than the O’Reilly books with scary insects on their covers. Ick. 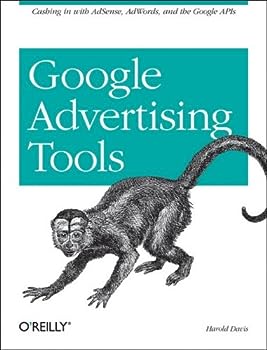 The book concerns, unsurprisingly, Google AdWords and AdSense, but it also talks about SEO (Search Engine Optimization) and the process of driving traffic to a website. Davis dispenses with the idea of adding significant article marketing-type content. So he instead focuses in on getting your site onto directories. He also does not seem to get behind requests for backlinks. He does not seem to go for the other kinds of authority enhancements which seem to go in and out of style these days.

Davis also covers affiliate programs, such as Amazon and the like. For example, if you happen to check out the link to purchase the book from this blog entry, you will see an affiliate link in action. He also covers sponsored and contextual advertising.

Hence the book probably would have been better titled Advertising on the Internet. Because it explains far more than Google’s offerings. And it goes into far more detail.

While this book was not strictly about Social Media, any Social Media Marketer worth his or her salt should at least make a concentrated effort to understand online advertising. Because optimizing sites for advertising often helps to optimize them for other purposes as well. And these include important to tasks driving web traffic and even making conversions or sales. Important to the bottom line? Absolutely. Google Advertising Tools by Harold Davis is a worthy addition to the web developer’s library.