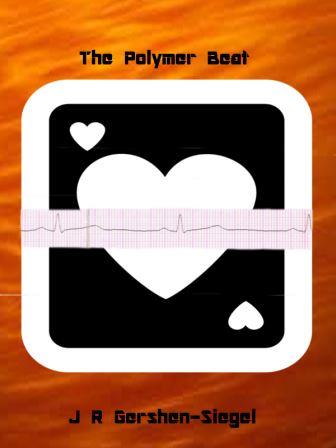 The Polymer Beat moves the Obolonk action toward not just the robots which have an overall story line—it also explores main character Peri Martin’s romance with spy Dave Shepherd.

Just like that universe’s society is tripartite, so are the three novels. So the first one, The Obolonk Murders, is all about the aliens.

And this, the second work, The Polymer Beat, is dedicated to semi-sapient and more than semi-sapient robots. Hence the third is all about humans and is called The Badge of Humanity.

The second and third novels also have somewhat punny titles, with both playing off the police props of badges and walking a beat. The reference to polymer is because of robots. These books all have themes. This one is robots although I will admit it’s subtle.

After I picked The Obolonk Murders back up again in 2014, I realized I had the makings of a trilogy on my hands. Hence The Polymer Beat became my 2014 NaNoWriMo project.

I also had a few dangling bits from the first book, including solving the murder and Peri’s disastrous first date with Dave.

As Peri and Tommy work on the Obolonk cases, Peri and Dave Shepherd get closer. Peri knows this is a bad idea, but she goes along with it anyway. And, as she and Tommy continue to try to find the killers, she notices Tommy’s simplistic robotic feelings are taking a turn. Could Tommy become jealous?

The main character (as before) is Detective Sergeant Peri Martin. The scenes shift from the Boston Megalopolis to various places in the Solar System, including Ganymede.

Other characters include Tommy, Dave, They Say This is the One, Sally Bowles AKA They Say This One Tiles Bathrooms Adequately, and lawyer Akanksha Kondapalli.

“Were you programmed to be an optimist?”

He considered the question briefly. “I cannot tell.”

“Yes,” he mumbled as she hoisted her bag onto the room’s sole bed.

Peri stopped what she was doing and came close to the robot. “What is it?”

She looked at him closely. “If I didn’t know any better, Tom, I’d swear you were upset.” He stood there stoically, although she did see him scan once, briefly.

Peri returned to her bag and began unpacking it, stuffing most of her clothing into the top drawer of the room’s sole bureau. “I’m not even so sure why I’m going out with him, truth be told.”

“I do not understand.”

“Heh, I would explain it if I could. It’s not like my mini-phone’s been chiming all day with offers since Charlie died.”

“Is this,” the robot paused, maybe to select the proper words, “your first such offer since that event?”

“Event,” she echoed, taking a shimmering silver dress out of her bag, “that makes it sound as if there were engraved invitations, or something.”

“I did not intend that definition.”

“I know you didn’t. But you gotta understand, Tom, or at least just, just try to. I saw Charlie mortally wounded by a scrubbed hot gun. It happened right in front of me.”

“That is what your psychiatric evaluation said.”

Trembling, she looked daggers at him. “What else do you know about me that’s private?”

The book has a T rating. There are no really violent scenes but there is an explicit sex scene. Occasional bad language, but not much.

Middle books in trilogies tend to drag, and this one is no exception. I need to improve it! In addition, beta readers would be helpful—hello!

It would be great to get some developmental editing help with the dragging parts in the middle to last third.

But I like the idea of it, and I think Tommy in particular gets developed much better. Dave remains an enigma, but that’s the idea. He is a spy, after all.