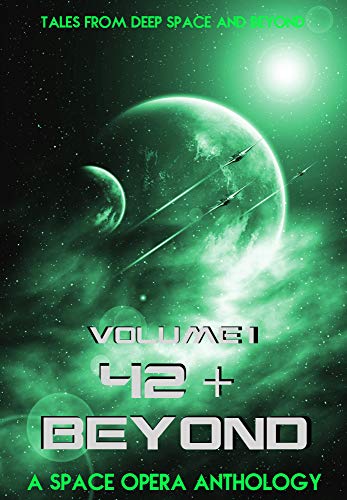 Categories:Book Reviews
by Janet Gershen-Siegel |
on May 11, 2021

Surprises was one of those weird little stories which I did not expect to write.

So it’s a sequel of sorts to The Enigman Cave.

The background is that Marnie and company are on their way back to Earth. So it is not going to be easy going. Marnie is well aware the reception they get might not be such a great one. In fact, it could even be a death trap.

The Plot of Surprises

And the plot is, well, there isn’t too much of one. Essentially, Marnie and her pals get drunk, much like at the start of The Enigman Cave. But in this instance, they are worried about how the Earth is. And so Marnie ends up an emotional mess.

But keep in mind, it was a requirement of this anthology to add two specific elements. I had to add a towel and the number 42. So this was in keeping with the anthology’s Douglas Adams theme. For this space opera, it did not lend itself too well to either Easter egg.

The characters are Captain Marnie Shapiro and her first officer, Trixie LaRue, and the chief medical officer, Jazminder Parikh. Assistant Veterinarian Lex Feldman shows up. But it’s botanist Ben Chase who gets the most time – and he isn’t even “on screen”.

“We got ourselves a gol-darned party here,” LaRue said, her accent betraying every moment of a rural Kentucky upbringing. “Booze ‘n dancing girls.”

“Just the one dancing girl,” Parikh said, doing a little swishing step and then a twirl which made her lab coat fly out a little bit, like the barest approximation of a whirling dervish. Her accent, in marked contrast to LaRue’s, was the posh product of a fine education in Leeds and a childhood in a wealthy suburb of Hyderabad.

“Jazzie, you sound plummier than usual,” Marnie said. “How much of that have you had so far?” She waved a bit at the bottle.

“I’ve had just enough to make me all right with it being chardonnay and not merlot. It’s alcohol for the damned hoi polloi, even worse than that white zinfandel rubbish. It’s a sorry sop for the masses.” She stabbed the air with a finger. “But at least it’s posher than that six.”

The story has a K+ rating. While no hanky panky occurs “on screen”, there are certainly references to it. Plus, there is a bit of bad language and a brief bit of nudity at the end. However, I don’t describe the nudity in any way. So it’s just … there.

It was great when 42 and Beyond published Surprises. But the anthology is no more. It only lives on in memory and in a few scattered books and Amazon Kindle files. A pity.